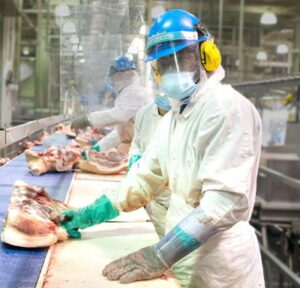 “Essential” does not equal “Expendable”

From National Justice for our Neighbors.

Iowa JFON and Immigrant Legal Center—our JFON site in Nebraska—press their states to protect the health and safety of meatpacking workers, their families, and communities.

In early April of this year, it suddenly became apparent that the nation’s meat-processing plants—designed for ultimate efficiency and productivity—were the ideal breeding grounds for the coronavirus. By mid-April, 2,200 people in 48 plants were infected with COVID-19.

It is now mid-May, and that number has increased five-fold: 10,000 COVID-19 cases have been linked to meat-processing plants, and at least 45 people have died.

The Trump administration’s new executive order compels meat-processing plants to remain open, protects companies from liability if one of their workers falls ill, and provides worker-safety “guidelines” that management should make “good faith” efforts to follow.

Enforcement of these safety guidelines, however, is missing. There are no legal repercussions for failure to comply.

Meanwhile, rural areas with large meat-processing plants are among the U.S. counties with the highest rate of COVID-19 cases.  New York City is the U.S. epicenter for the pandemic, yet both Louisa and Dakota counties have a higher rate of infection:

By April 30, nearly 700 workers at the plant had tested positive for COVID-19. Tyson closed it  for several days for a deep cleaning.

The Pandemic hits the Heartland

When the COVID-19 pandemic finally came to the Midwest, it didn’t come for the cities. It aimed instead for the rural areas and small towns—the kinds of places often dependent on one major industry and structurally unable to withstand a three-pronged attack on their workers, healthcare resources, and economy.

Midwestern meat processing reflects a diversity not usually associated with these states. Workers—some of them JFON clients— come from Mexico, Central America, Burma, Laos, South Sudan, the Democratic Republic of the Congo, and Bosnia, among others.

The pay is well above minimum wage—starting at as much as $16 to $20 per hour with benefits—and familiarity with English is not a requirement.

But the work is brutal, hard, and labor-intensive. At a manufacturing plant, a lot of the work is automated. There is space between the workers. At a meat-processing plant, however, the workers stand shoulder to shoulder, hands and tools rapidly moving the product down the line. To space the workers out would mean slowing down production.

When COVID-19 began barreling through the nation’s meatpacking plants, the Tyson plant in Columbus Junction, Iowa, was one of the first to feel the brunt of the disease. Within weeks, nearly 200 of the workers fell ill. Two employees died. The company was forced to (briefly) shut down the plant.

“I think our clients were first under the impression that the coronavirus was a hoax,” says Legal Director Ann Naffier, “until people started dying.  After that, they just really seemed to be in shock.  Now that the plant is reopened, they are continuing their lives as best they can, but they are both terrified of getting COVID-19 and of losing their jobs.”

For Roxana Cortés-Mills, ILC’s Rural Capacity Building Managing Attorney, this issue cuts close to home. “My parents are packing plant workers who live in Nebraska and work in Iowa,” she explains, “and they were experiencing the difficulties we are currently battling.”

Several other ILC staff members also have family members who work in local plants. They expressed concerns about the lack of PPE and social distancing on the packing plant floor, but they were particularly concerned about the lack of transparency. Nebraska is now refusing to release specific numbers of cases at meatpacking plants. How can a person make an informed choice for their own personal safety if they aren’t allowed to know the infection status of the person they stood next to for hours?

If the work is essential, then so are the workers

The Trump administration issued its executive order on April 28; nearly two weeks later, many plants remain shuttered, and few are operating at full capacity.  The fact remains that you cannot do essential work without essential workers.

At some plants, as many as half of the workers are sick, in quarantine, or too fearful to come back to work, despite their employer’s reassurances that safety precautions are in place and will be enforced.

Meanwhile, Tyson reopened its Dakota County facility on Thursday, May 7.

The next day, on Friday, May 8, Dakota County reported a single-day record of 361 new positive tests as local hospitals strain to deal with a hospitalization rate double the U.S. average.

Five people have died so far.