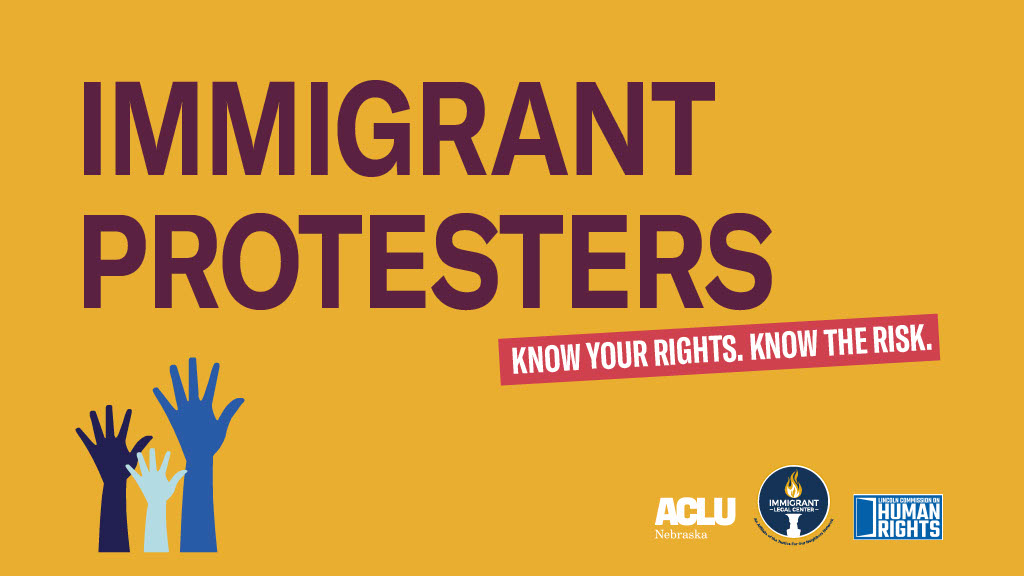 Partners Launch Protester Rights Guide for Nebraskans who are Immigrants

LINCOLN, Neb. – As federal lawmakers debate immigration reform in the months ahead, Nebraskans will no doubt be using their voices and practicing their right to speak out. Thanks to a new resource, Nebraskans who are immigrants can more easily understand their rights and the risks of protesting.

The ACLU of Nebraska, the Immigrant Legal Center, and the Lincoln Commission on Human Rights (LCHR) have published a “Know Your Rights” guide focusing on protesting rights for people who are immigrants. The guide is based on a similar document that the ACLU of Nebraska shared at some of the state’s largest racial justice demonstrations in 2020.

The U.S. Constitution protects every person’s due process and equal protection rights in the United States, regardless of immigration status. The new guide is intended to give people who are immigrants the knowledge they need to participate in political protests, marches or demonstrations.

ACLU of Nebraska Legal and Policy Counsel Rose Godinez said partners saw a need for a specialized guide because non-citizens and lawful permanent residents alike must consider factors that don’t apply to other Nebraskans. For example, an arrest – even without conviction – could negatively impact someone’s eligibility for citizenship in the future.

“Our friends, neighbors and family members who are immigrants should feel empowered to participate fully in our democracy, but they face real barriers because of harmful immigration enforcement policies and practices,” she said. “We hope that this guide will help Nebraskans who are immigrants feel more secure and will enable them to practice their First Amendment rights as safely as possible.”

The guide notes that immigration policies disproportionately affect immigrants of color. Just like Black Americans, Black immigrants are more likely to be arrested, convicted and imprisoned than the immigrant population as a whole.

Last year, LCHR began fielding calls from immigrant community members with questions regarding the racial justice protests that were occurring.

LCHR Director Mindy Rush Chipman explained, “It was clear that participating in the protests was important to immigrants across the community; however, it was also clear there was no resource available to provide information on how to effectively and safely utilize their right to peacefully protest as new Americans. Now, this multilingual protest guide specifically developed for immigrants in Nebraska will help.”

“Immigrants, like all Nebraskans, should be able to live with confidence and free from fear, and that includes the right to protest,” added Dearra Godinez, director of legal services at Immigrant Legal Center. “We recommend seeking advice from an immigration attorney before deciding to protest, and believe this guide will provide valuable information for immigrants looking to make their voices heard through protest.”

The guide is available online in English and Spanish on each organization’s website. Print copies can be found in the Immigrant Legal Center offices in Omaha and the LCHR office in Lincoln’s City/County Building.

The partners plan to make versions available in Arabic and other languages in the near future.