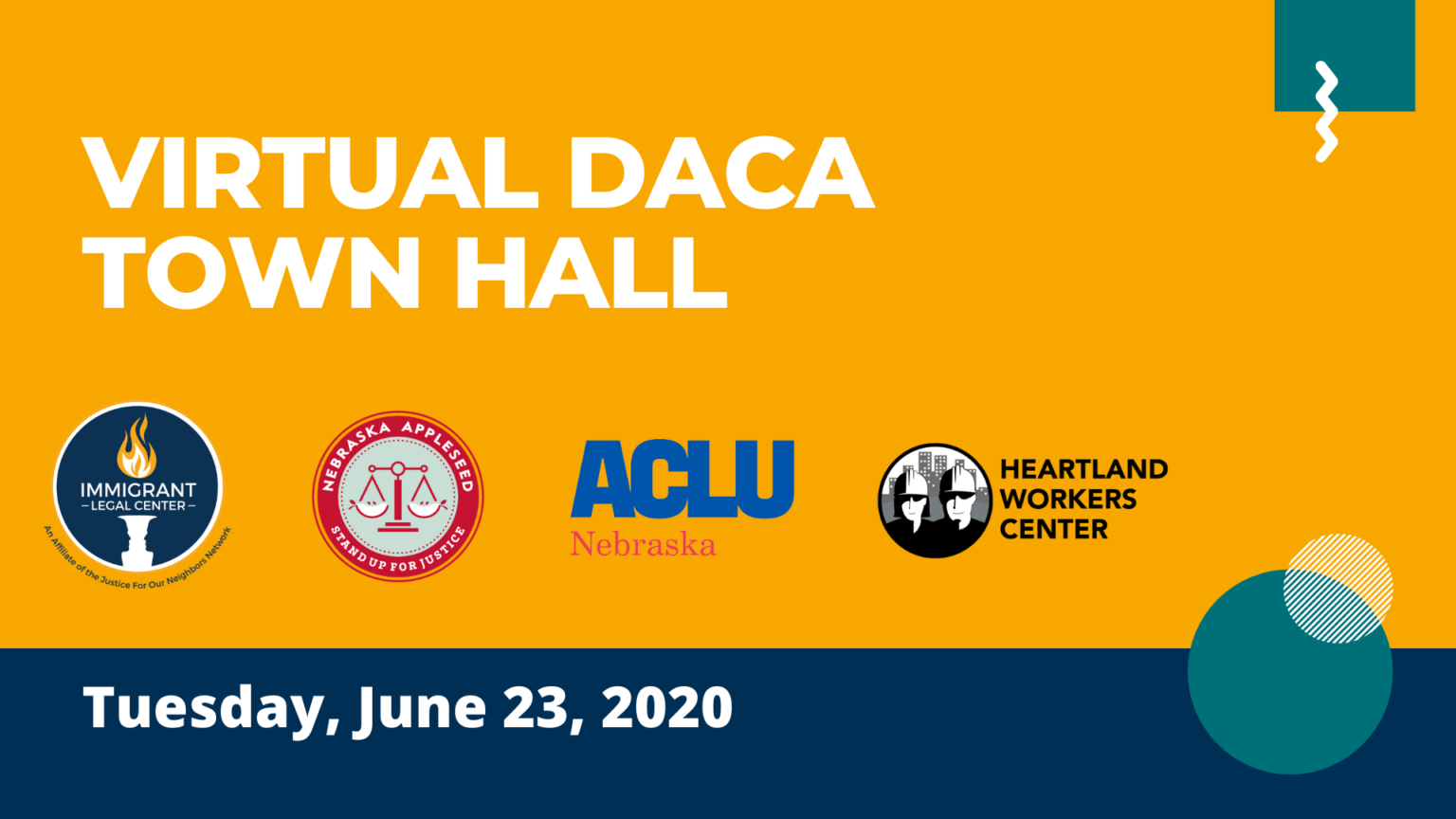 Erik Omar, Immigrant Legal Center
The Supreme Court of the United States ruled that the Trump Administration’s termination of DACA was unlawful. However, the Court did not rule on the legality of the program. Therefore, the Administration retains the power to terminate the program, and it could take steps to do so lawfully at any time.

Make no mistake: Voters support Dreamers. 76% of voters support their citizenship, including the majorities of those polled with both Democrat and Republican identities. This is not a partisan issue. Dreamers are not pawns. It is unacceptable to confuse their lives with any other congressional agenda.

We call upon our legislative representatives to advocate for real stability and inclusion of our Dreamers. The United States needs a clean, legislated pathway to citizenship for Dreamers and their families.

Rose Godinez, ACLU of Nebraska Legal & Policy Counsel
The Supreme Court decision affirms what thousands of DACA recipients in Nebraska already knew: their home is here. This decision provides meaningful but temporary protections for Nebraska Dreamers that enrich our communities daily. Thankfully, Nebraska Dreamers have been provided a reprieve from the constant threat, anxiety, and fear of deportation, something that never should have been a possibility. The vast majority of Nebraskans strongly support providing a permanent path to citizenship for DACA recipients. Senators Deb Fischer and Ben Sasse need to stop playing politics and join bipartisan efforts to pass the American Dream and Promise Act. Nebraska Dreamers have waited long enough. The time for decisive leadership is now.

César García, Nebraska Appleseed, Community Organizer – Immigrants & Communities Program
“Dreamer Nebraskans are part of the fabric of Nebraska communities all across our state — moms, dads, coworkers, friends, and neighbors,” said César Garcia, a community organizer with Nebraska Appleseed. “We celebrate the Supreme Court decision that keeps us whole for now, but Nebraska communities have been waiting for more than a decade for Congress to create permanent legislation. The Senate must pass the Dream and Promise Act without delay to provide a long-overdue process to apply for citizenship for longtime, contributing members of our communities.”

Sergio Sosa, Heartland Worker’s Center
The Heartland Workers Center was pleased to hear about the Supreme Court’s decision last week to keep DACA in place, as these young people have always had a myriad of supporters. This ruling continues to support our nation’s immigrant youth as they contribute to our communities, especially during this time of COVID.  Yet, how much longer must we continue with temporary solutions to long-term problems?  It is time for Congress to act to create a permanent solution that reforms our broken immigration system, specifically to keep families together, stop deportations, and create a pathway to citizenship.  Because of this, it is more important than ever that for those of us who are eligible to vote actually go out and vote in November.  We must have elected officials who have the political will to stand up for and pass comprehensive immigration reform

Senator Tony Vargas (NE-7)
I am thrilled with recent Supreme Court decision to uphold principles of fairness and justice through retaining DACA, protecting more than 640,000 individuals nationwide. Locally, the DACA program has helped over 3,000 young, hardworking Nebraskans contribute to and care for their communities, continue their education, and help fuel our state’s economy. I will continue to stand in support of DACA, our young people, and immigrant families as your senator.

Fatima Flores-Lagunas, DACA Recipient
My name is Fatima Flores-Lagunas, I am a DACA recipient in the state of Nebraska. Last week the Supreme Court stated that Donald Trump violated the Administrative Procedure Act when he revoked DACA in 2017. For thousands of DACA beneficiaries across the country this decision was one that we welcomed. We understand all too well, however, that this is not the finish line. We need to continue organizing and working collectively to ensure permanent protections for DACA recipients and Dreamers by passing “The Dream and Promise Act of 2019” in the Senate. DACA recipients have been on the frontlines of this issue for years. Now it is up to the voters and our allies to demonstrate their solidarity by voting for candidates that will not only support but also fight for Dreamers and communities of color. By harnessing the power of collective action, dedicated intent, and a strategic vision we will finally create the change that our communities so desperately need. ¡La Lucha Sigue!

About the Decision:
On Thursday, June 18, 2020, The Supreme Court of the United States held by a 5-4 vote that the decision by the Trump Administration to terminate DACA was “arbitrary and capricious” under the Administrative Procedure Act (APA).

About Immigrant Legal Center
The Immigrant Legal Center is a nonprofit organization that provides legal services, education, and advocacy for immigrants in Nebraska and Southwest Iowa.  Employing a diverse team of specialized professionals, we are uniquely qualified to take a holistic approach to our clients’ immigration-related needs. Immigrantlc.org

About ACLU Nebraska
For over 50 years in Nebraska, the ACLU has worked in courts, legislatures, and communities to protect the constitutional and individual rights of all people. aclunebraska.org/

About Nebraska Appleseed
Nebraska Appleseed is a nonprofit organization that fights for justice and opportunity for all Nebraskans. We take a systemic approach to complex issues – such as child welfare, immigration policy, affordable health care and poverty – and we take our work wherever we believe we can do the most good, whether that’s in the courthouse, at the Capitol, or in the community. neappleseed.org/